ExitGame Rotterdam — Rotterdam, The Netherlands
8.1
Based upon 16 reviews
The Heist is closed (for good) and not available to play anymore.

Min. 3 -~ Max. 6 - Aanbevolen 4
Read reviews
This location has no English info yet, but you can try Google Translate.

I did not know exactly what to expect from this room, but I liked the description in the website and decided to try it out. We did the room with 5 and it was fine, but I agree with the recommended number of 4, although by experiences escapers also less people could even be better. The venue is easily reachable and it is nicely arranged. We were received in a friendly manner by our gamemaster. He took a lot of time after the game to discuss the game, which I always like.
The story is nice and I liked also the concept of breaking in, instead of escaping. The interesting thing was that unlike other escape rooms, which you have to break in, but also escape within a certain time, it does not matter what you do in the room. in this case there is a point based system, so the time you need (as long as it is below an hour) does not matter. The important thing is how you complete the tasks and trying to get the maximum points by doing so.
After playing quite some games, I liked the different concept. We had a great time.
As the whole thing consist of robbing a bank, you cannot expect any spectacular set, I think it was nicely done, in a realistic way. Obviously it is not as impressive as when the escape room has a very special setting, but in spite of being simple it is very nicely done, so you get the feeling of being in a real small bank office somewhere.
A similar thing can be said about the puzzles, there were no puzzles particularly surprising for an experienced escapers, but in the context of the escape they were ok.
The hint system was original, and also related to the topic, so all in all I can only recommend this room. 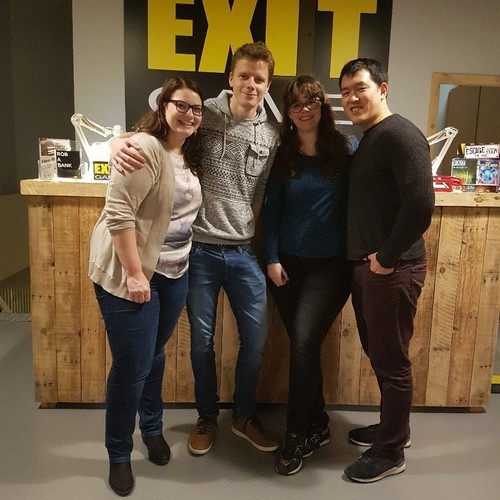