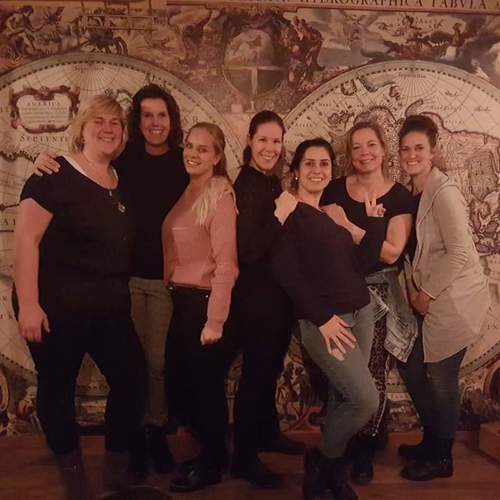 Mmmm....could and should be better

This room is described as a difficult room for minimum four, and there is a reason for that: lot of puzzles! I enjoyed the puzzles, there was a variety of them, but of course many are known to the experienced escaper. But I will get back to that later.
While the guy who received us was nice and friendly I did not feel an enthusiastic reception, which is what I have encountered in most of the rooms so far. Some general talk about escape rooms, and too little about the story, it is nice, when the story is told in such a way, that you want to play it. I missed that completely. The reception was way too simple, no place to gather really before or after the game. Also, the start of the game should be improved. A simply "you start here" is not enough. The major flaws were though, that something that should have happened did not, the gamemaster had to enter, while entering the thing was finally triggered. Kind of a waiting moment, because everything was solved but the thing that did not work. And there was an issue in the final puzzles, where something was open, that apparently should not have opened. It was not very clear, but part of the team was busy with that and did not realize that the game was completed.
Even not considering that, because mistakes happen, I lived some minor ones in other escape rooms, there were several things that did not meet my expectations. The setup is quite simple, to call it somehow, and the not touch stickers do not contribute at all in the atmosphere, which per se is not that good. There were some parts, which were incomplete to name it somehow, and there was even some defect prop lying there. These are no go`s in my opinion. Als,o the quality of some objects was not that good.
I missed the flow of the game, there were lots of puzzles that could be solved independently, but there was practically no interconnection and the feeling of progress was limited. There were elements related with the topic in the room, but also some, which had not much to do with it, the same applies to some of the puzzles.
To discuss the more postive aspects, there was a large variety of puzzles, and I liked that in this big amount everything was clear, namely which puzzle solved what, in some rooms this is not that clear. The puzzles were as such not that difficult, and many as I said before should be known to an experienced escaper. I think the room is good for gaining some experience into puzzles, eventually for getting an idea of what an escape room is about. There is certainly room for improvement.