Dragged by the enthusiasm of Heiner from Escape Roomers and together with Melly and Roland from the Austrian blog Out Of Time, who took care of the organization, I paid my first visit to play Escape Rooms in Vienna. This is a little review of the games we played, which is neither a complete guide, nor a compilation of the best games (although THE best is part of this review), but rather of some of the latest openings in the city, which my escape travel partners had not played yet.

In this weekend we played 8 Escape Rooms (grouped by company), as follows:

No Way Out
This company, originally from Dubai, has five rooms in one venue. All of them are 60 minutes rooms for 2-6 players. Although we were invited as testers, the rooms were already open to the public, therefore this review represents the situation, when they opened. In the meantime, they have probably already implemented improvements.
We played The nun, The unknown and Mission Belvedere. The other rooms of the venue are Da Vinci and School of Magic. 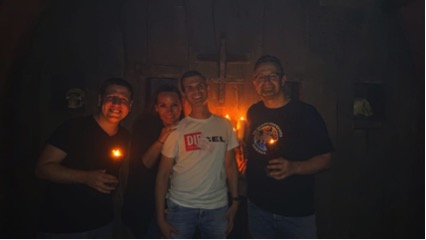 The Nun
The nun and The unknown are the first escape rooms of the horror genre in Vienna. Contrary to places like Barcelona and Athens, the horror genre (including actors) is not much exploited in countries like Austria, Germany and the Netherlands, although slowly, but surely, rooms of this kind are opening (e.g. Amsterdam Catacombs). We were really curious, about how these rooms were going to be. The story of the room is actually the sequel of The unknown, but the order of playing is not really important. If you are familiar with horror escape rooms, this is not especially scary, but considering the aspect mentioned above, it is a nice game for starting with this type of games, and test your bravery. They created a nice experience, but in my view, it was still not polished. The difference to more mature industries (cities mentioned above) is noticeable, but this room has a lot of potential concerning decorations, use of the space and actor role. The ending was poor, and that is something that can kill the experience. I hope that by now, they have implemented improvements (some were already planned when we were there) and incorporated some of the feedback we gave. Despite my critical view, it is actually quite a good room, and if they polish it, it will definitely be an interesting one to play in Vienna. 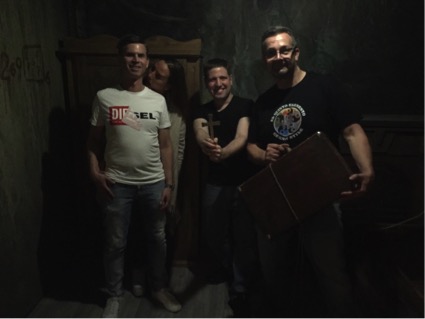 The Unknown
We were the first group experiencing this room with an actor. This room opened after The nun (in spite of being the prequel) and I wonder if it was planned after The nun as well, because this is a much more mature experience. Definitely higher in terms of scary moments, and several quite disturbing elements, that can be the cause of nightmares for the faint of heart or impressionable people. That, in a horror room, is a good sign! A nice flow, decent puzzles and a well-achieved atmosphere round up a very good experience, and made this room one of my favorites in this trip. 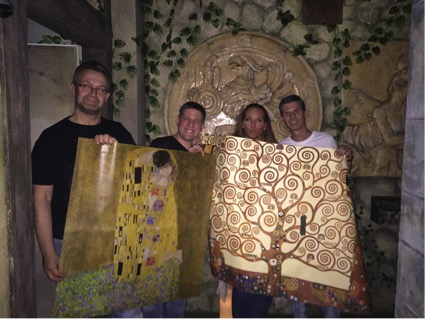 Mission Belvedere
This room is a classical break-in room with the objective of stealing Klimt’s famous painting. I found a pity, that they opened it to the public so early as it was clearly an unfinished room, some props were missing or not working, so I will try to judge past that, because it is actually a really good game. Good classical start of breaking which was well-achieved (not considering the missing things), decent puzzles (with the exception of one puzzle, that no one in the group understood, why it was there, what was its purpose and how it was related to anything we were doing) and a nice flow with a good finale create a nice break-in experience. It is nice also that the room is connected to an iconic aspect of the city and adds in my opinion to the experience, considering in particular visitors to the city. All in all, No Way Out in Vienna can be recommended, as we heard from Melly that the other rooms are also very nice.

Jungle game
We booked this room spontaneously to optimize our escaping time in town and the truth is that we had a lot of fun, but not because of the room. It was because of the whole bizarre experience. It is easily in my Top 3 of worst games ever played (for number 1 check a recent review of a game in Amsterdam) 😉

To start with, we get in the room with the game master, that started explaining us stuff and doing it herself. Already at this point, you can imagine the look on our faces. The room did not get any better, one of the puzzles had a hand-made correction. Some of the puzzles lacked logic (the worst riddle in an escape room goes for this room, even after we asked for the explanation after the game). The room is one of this Russian turn key escape rooms. Walls painted in green, animal pictures, the bought props and voilà: a jungle escape room!

I do not know the other rooms, and I do not want to, if they are as bad as this one. Fair warning: The same Russian company has sold this room all over the world, therefore exactly the same room can be found in other European and American cities. Do not waste your money!

Brainteasers
This company has two rooms: Der Schatz des Pharaoh and Free Lilli, which is the one we played.

Free Lilli
This was another spontaneously booked room and way better than our “jungle experience”. I liked first all the very original theme of rescuing a monkey from a lab. There are classic themes in escape rooms, and it is always refreshing to encounter other ideas. There are two things I did not like from this room, the first is that they sell you extra time, if you do not manage in the 60 minutes. Do not get me wrong, I am not complaining about the cost, because for 4 people the price was very reasonable and for a major European city less expensive than what you would pay in Amsterdam for instance and the price you pay for the extra time was not much, but I do not like the principle behind the idea. In any case, luckily, we did not need it. The second thing, which I did not like was the beginning, which was really poorly conceived. I have seldomly found such a poor beginning with a random puzzle in the middle of red herrings, with a not so clearly derivable logic. An absolute time waste. After passing that barrier, the room turned out to be really good, several nice and original puzzles, including chemistry (ok, I am a chemical engineer, but it was a nice “hands on” puzzle) and an acceptable ambiance. With the exception of the beginning a really nice room.

Escape Mission
According to its website this is Vienna’s first escape room (called Mission60 in the past). It has two rooms: Devil’s mountain and Der Alchemist. We played the latter. 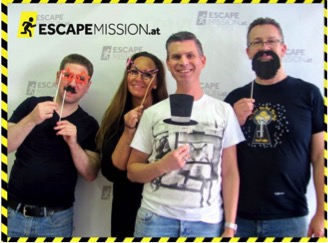 Der Alchemist
When I was checking the room we were going to play, on the website, I saw that the record time was 17 minutes. I was hoping that it was 17 minutes left, but no, we learned that it was 17 minutes. Our team made it out in 24 minutes, therefore the experience for an enthusiast is not satisfactory. It is a rather simple room, with classical puzzles, so nothing surprising or special about it. It is not a bad room as such, the puzzles are logical and there is clearly love and effort put into the room, but the industry evolved a lot, and there are way too many better rooms out there. I would only recommend this room for absolute beginners.

SherLockd
This company has two rooms, one of them double, which can be played as battle rooms. The second and newest room (Baker Street 221/B) is the one we played. 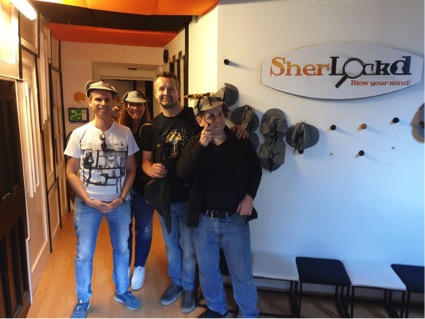 Baker Street 221/B
This room was a pleasant surprise. It is the doing of a single person, one could speak of a “home-made” room. Obviously, it is not fair a comparison, between this room and top rooms with a lot of investment and a whole team behind it. I found that this room shows perfectly that even on a budget, if you are creative you can create a really nice experience. I enjoyed finding original, clever and logical puzzles and also a couple of nice surprising elements. Contrary to mass-products, this kind of escape rooms enrich the scene. Yes, the ambiance might not be top notch, but in terms of puzzles nothing to object. Definitely worth giving it a try.

Crime Runners
This company has 4 rooms, three of them in another venue than the fourth one, which is the one we played and their latest creation.

Going underground
I will start with three letters: WOW! With this room the team of Crime Runners has put Vienna in the list of mandatory visits for escape room enthusiasts, if only to play this room. I have not a ranked list of all the games played, but I can say without any doubt that this room earned a spot in the Top 10%. While I was playing the game, I was feeling like a child unwrapping Christmas presents. In any case, if you go to Vienna, even if its not for playing escape rooms, make sure you play this one, you will thank me later.

The ambiance and special effects are fantastic, at the level of the best of Europe. The talk with the owner was very interesting, about all the details taken into account (including safety regulations). The story is engaging and the game has a great flow. A nice variety of logical puzzles, there was not a single moment, where I felt we were too many, so 4 players is a really nice number.

Maybe for us, as experienced players, it ended up being a little bit short (the room is 90 minutes, but we were out in about an hour), but one cannot judge the room from that point of view. And usually, when you live this kind of amazing experiences, you do not want them to end.

Playing the best escape room in Vienna was a great way of closing the trip.

When you register you can keep track of the rooms you played and the ones you still want to play. Aside from that your reviews count towards the top escapers listing and you'll be able to join the conversation in the forums and the news articles. And it's all free!

Santiago is one of our regular visitors. He travels a lot playing escape rooms all over the world. This is part 2 of...

Santiago is one of our regular visitors. He travels a lot playing escape rooms all over the world. This is part 1 of...

Santiago is one of our regular visitors. After visiting Urugay & Argentina he wrote an article about the rooms he...

Santiago is one of our regular visitors. After visiting Spain he wrote an article about the rooms he played in...